You must be of legal drinking age to enter
this site. Please confirm that you are below.

You must be of legal drinking age to enter
this site. Please confirm that you are below

We support the Century Councils fight against underage drinking and drunk driving. To learn more, visit their website at: www.centurycouncil.org

Finally, a Whiskey for People Who Prefer Vodka

Distillers try to put a mature face on the youngest of liquors, white whiskey. 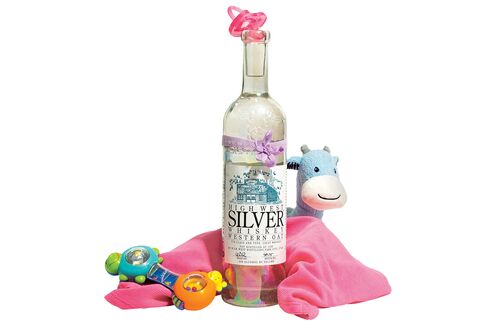 When David Perkins founded High West Distillery in Park City, Utah, in 2009, he knew it would be a couple of years before the company could introduce an original aged whiskey to market: Most straight whiskeys spend a minimum of two years in a cask before being bottled.

To bring in revenue in the meantime, Perkins relied on three tactics: mixing other distillers’ products into a unique blended whiskey (Rendezvous Rye); opening a restaurant to extend the brand name (the James Beard-nominated High West Saloon); and bottling two original products without aging them at all. High West’s “white whiskeys,” Silver Whiskey Western Oat and OMG Pure Rye, meet the requirements of a whiskey distinction only because they do a quick pass through some oak. “We have a 1-gallon barrel that we run a pipe into, so whiskey goes through, but it doesn’t stay there,” Perkins says.

High West, which was acquired earlier this month by Constellation Brands for $160 million, was one of the most prominent distilleries to start with white whiskey, but it’s become standard procedure for new craft producers. Not to be outdone, the big guys have claimed their own stake in the market: In 2012, Jack Daniel’s released its Unaged Tennessee rye, and Jim Beam introduced Jacob’s Ghost white whiskey. With 750 microdistilleries in the U.S.—up from 92 in 2010, according to the Distilled Spirits Council—the market for craft whites has gotten crowded, while revenue has dropped. In 2015 white whiskey sales dipped almost 4 percent—to about $250 million—despite a 7.8 percent increase in overall American whiskey revenue. (Collectively, American whiskeys generated $2.9 billion last year.)

The slight decrease in sales of white whiskey may be a good sign for its longevity. “I suspect the losses we’re seeing are driven by novelty products: Once you have it on the shelf, you don’t need a second one,” says David Ozgo, chief economist at the Distilled Spirits Council. After more than half a decade, the better product is rising to the top as the market for high-potency hipster bait—“the stuff called moonshine that’s sold in a Mason jar,” Ozgo says—evaporates.

Purists might scoff at calling white whiskey anything but a novelty, especially given that its higher alcohol content—68 percent by volume at the upper end, compared with about 40 percent for standard whiskey—tends to give the young spirit a caustic taste. Brian Van Flandern, a three-Michelin-starred mixologist and owner of Creative Cocktail Consultants, defends its bracing flavor. “The quality of distillation is getting better and better,” he says. “When you taste an unaged grain spirit, you get to taste that grain in its purest expression. It’s a quality finish, not influenced by char or oak from barrel aging.”

Whether it comes from corn, rye, or oat, white whiskey’s flavor profile is more like vodka’s than traditional whiskey’s. High West’s Perkins thinks consumers will warm to it as a sipping spirit. Other industry insiders have referred to it as a “blanco” expression of the traditionally amber liquor, borrowing terminology used to describe an unaged tequila.

Inventive mixologists are helping white whiskey find an audience by adding it to original creations. Cody Goldstein, beverage director at Mathews Food & Drink in Jersey City, has two signature cocktails on his menu that feature it: One, a clear hot toddy, combines white whiskey with autumnal spices including nutmeg, clove, and cardamom and is finished with anisette and Douglas fir liqueurs. The second, called Clearly Caffeinated, uses it as a base with filtered cold-brew coffee, Luxardo liqueur, cinnamon simple syrup, and crèmes de menthe and cacao. “I’m excited that people are finally putting the same care and thought into white whiskeys as they do other spirits,” Goldstein says. “They’re a versatile blank canvas, with lots of opportunity for new, flavorful creations.”